Do you identify yourself as a die-hard hobbyist- someone who takes his work more seriously than a casual? Or are you someone who earns money out of skilled work and trade?

If any of the question’s answers is a yes for you, then you must stay fully equipped at all times. And one of the most important pieces of equipment that should be in your arsenal is a heat gun.

To those who don’t know, heat gun does exactly as its name suggests. It produces and emits large amounts of heat to melt or soften any object.

However, in the skilled trade, there’s more than just melting and softening things. You also need to do much more like stripping off paint, welding and bending PVC pipes, loosening rusted bolts, etc.

Hence, you need a heat gun that is capable of producing and transferring the precise amount of heat for a plethora of heat-requiring operations.

In the market, there are many great heat guns. However, there’s one that seems to stand out from the rest. This is DeWalt DCE530B heat gun. This article is all about its review. It will help you decide if DeWalt DCE530B is the ideal one for you or not. 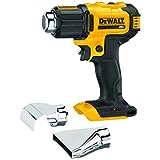 Every heat gun needs to deliver a high amount of heat so that it is capable of performing a wide range of operations. Such a heat gun is better because then you won’t need to switch to different heat guns for different purposes.

DeWalt DCE530B heat gun is just the same. It is capable of producing heat up to an enormous temperature of 990 degrees Fahrenheit (532 degrees Celsius).

Now come the nozzles. They are some of the most important parts of any heat gun. Some heat guns provide a couple of nozzles with the heat gun unit, while others don’t.

Fortunately, this one does. The nozzles are necessary to properly transmit the generated heat to the required portion of the working materials. The two nozzles provided are- the flat nozzle and hook nozzle.

Most of the heat guns depend upon an electric cord for their power source. However, this is where DCE530B is far superior to its counterparts.

It comes with a pre-installed chargeable battery. So once you charge it, you can use it anywhere. You won’t be needing to worry about the location of a power socket from your working material. DeWalt DCE530B is fitted with a powerful lithium-ion battery of 5Ah.

Of course, you won’t like the battery to die down within a few minutes from the start of its operation. Hence, the battery is capable of running up to 42 minutes after getting fully charged.

DeWalt DCE530B also comes with many other minutes but significant additional features that make it an overall better product. One of the features is its lightweight and small size.

The other feature is the provision of an LED light. If you are working in a dimly lit place, then it becomes hard to work properly. You might need to bring in a flashlight for lighting purposes.

However, with this heat gun, you don’t need to worry about it. This is because it already has an LED light mounted on it for such situations.

Also, DCE530B has a compact structure. On top of it, it also comes with a provision of 1 year of free service. Besides that, the heat gun comes with a 90-day money-back guarantee too.

There are many past users of this great heat gun. Most of the customers have held DCE530B in very high regard. Some of them have even noted its capability of producing instant heat.

Most of the customer reviews are very satisfied by the quality and value of this heat gun. On top of that, users have also noted its exceptional durability, effectiveness, and ease of use.

If you need to go hands-free in the middle of any task, then just don’t worry DCE530B has had your back. So, if by any chance, you can’t hold on to your heat gun, or just don’t want to, then you can go hands-free- without any hassle.

After all, that’s what the powerful battery of 5Ah is for. You don’t need to restrict yourself to those places where your electricity lets you. After charging it fully, you can go anywhere you want to work with your heat gun. Plus, you won’t also need to deal with the bulky cord either.

That’s one of the biggest reasons; it is one of the best in its class. Many users have noted its capability to produce instant heat. This also saves your time along with huge amounts of energy since it takes very little time to heat up.

To make its operation easy and smooth, it is pretty light in weight. With a weight of a mere 1.17 lbs, it is only 6.33 inches long. This makes the user comfortable holding it for extended periods of its operation. To further improve its performance and output, it also comes with a high volume flow rate of hot air 6.7 cubic feet per minute.

DeWalt DCE530B comes with only 2 temperature settings. This makes it unfit for the emission of the precise amount of heat for a wide range of operations.

No provision of LCD/LED screen

There’s no provision of an LCD/LED screen which makes it difficult to observe the set input parameters like temperature. In contrast to this, some heat guns come with a screen mounted on them. This makes it easier for the user to see the input parameters.

Before going with the purchase, first, understand what your requirements are from a heat gun. Once you know, it will be easier for you to go ahead with your purchase. DCE530B is generally preferred because it has a dual temperature setting with 990 degrees Fahrenheit highest temperature attainable.

The next thing to make sure of is the useful life of the heat gun. Everyone wants a long useful life of any product they buy. DeWalt DCE530B comes with a robust cooling mechanism that prevents the internal components from overheating. Hence, ensuring its longevity.

If you don’t have steady hands, then DeWalt DCE530B is good for you. It comes with a hands-free mode of operation.

An Alternative To DeWalt DCE530B

This enables it to carry out a wide range of heat-demanding operations. To carry out the emission of the precise amount of heat, it comes with a whopping 55 temperature settings. Besides this, it has a provision of a robust cooling mechanism along with five different fan speeds.

Not only that, it comes with four different types of nozzles for efficient heat transferring from the gun to the working material. And the best part is that it is covered by an unbelievable 5-year warranty. So, if anything goes wrong within five years of purchase, the company will take care of it.

What is the warranty period of DeWalt DCE530B?

DCE530B comes with a warranty of 3 years. Besides this, it is covered by a year of free service and a 90-day money-back guarantee.

What is the maximum temperature DCE530B heat gun is capable of producing?

It is capable of producing a temperature of 990 degrees Fahrenheit (532 degrees Celsius). Besides this, it comes with two different temperature settings.

Yes, DCE530B is cordless. It has a rechargeable battery installed in it. So, you don’t need an electric cord to power it. You can easily go with your heat gun anywhere you want.

Does it come with nozzles?

Yes, it comes with two nozzles. One is the flat nozzle, and the other one is the hook nozzle. The provision of nozzles facilitates the efficient transfer of heat from the gun to the working material.

Does it support hands-free operation?

There’s a lot that this heat gun offers. It can produce high temperatures and instant heating, which is a very big plus point. Not only that, the best part is that it is cordless.

So, you don’t need to manage and maintain the meters and meters of the cord. All you need to do is to charge its battery and go back to work with it afterward. Besides this, there are many other features too that come with it that make it worthy of your money.